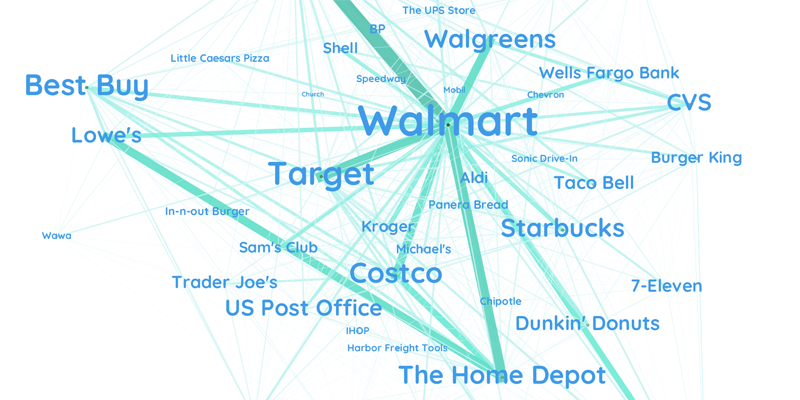 Data Report: American Drivers Head to Walmart More Than Any Other Destination

When Americans hit the roads heading somewhere other than work, a safe bet says they have one destination in mind:

That’s because the nation’s biggest retailer is also the most popular destination for the nation’s motorists, a study of navigation app voice searches from 2015 to 2018 reveals.

Drivemode’s data team analyzed verbal searches from 876K anonymized Android drivers, excluding requests for “home” or “work,” and ranked the twenty most common requests nationally and in ten states. The voice-searches are called “requests” or “requested destinations” for this report.

Here are some of key findings:

“What motivates American drivers? Commutes and commerce,” said Yo Koga, Drivemode CEO. “If they’re not driving to work, this new study shows that Americans get behind the wheel to spend money somewhere, mostly on food. They’re especially drawn to large businesses like Walmart and McDonald’s that advertise extensively and are available, accessible, and convenient in most American communities. In light Amazon’s e-commerce success, it’s clear that consumers still enjoy selecting their produce with their own hands or being served a hot burger and fresh fries.”

“While some Americans are driving to run other errands, like to the post office or the bank, that’s not nearly as common as retail-related trips,” said Koga. “This study underscores just how much traffic on America’s roadways can be attributed purchasing habits, particularly when the purchases are edible.”

The table below shows the overall percentage for the most frequently requested destinations nationwide, as well as the relative percentage within that business category:

DESTINATION CORRELATIONS ACROSS THE U.S.

Drivers who request certain destinations are prone to have other favorite destinations, too.

To find these relationships, Drivemode aggregated, indexed, and ranked driver destinations then mapped those destinations to each other to show the frequency of visits to businesses on a monthly basis.The strongest correlations between these destinations— what are called “co-occurrences” for when a driver visits both businesses within a month—are ranked below by frequency on a national level for US drivers in aggregate.