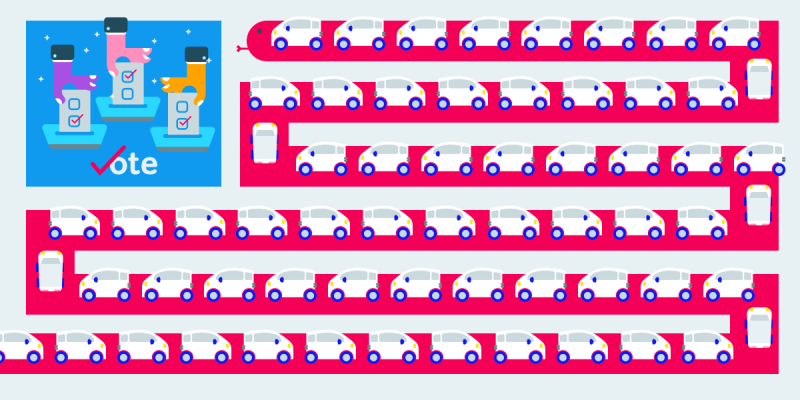 Election Day for 2018 midterm elections is Tuesday, November 6th and voter turnout is predicted to hit a 50-year record high. Senatorial races are of particular interest as Democrats are fighting to win back the Senate from Republicans. Ten state races look “legitimately competitive,” potentially making an impact on the makeup of the Senate, and the heated Texas election between Ted Cruz and Beto O’Rourke has shown that voters are ready and rarin’ to go next Tuesday. The race has captured the national spotlight and sparked unprecedented voter enthusiasm.

There are myriad ways that voter turnout can be impacted—from public registration protocols to private work schedules—but day-of logistics will inevitably include traffic. To help drivers in Texas prepare for Election Day 2018, Drivemode analyzed driving trends of over 477K anonymized Android users on every Tuesday from November 2017 through September 2018. Filtering data from the four largest cities in Texas, Drivemode determined the best and worst times of day, clustered around rush hours, to be driving in these metro areas; data compared the number of minutes it took an average driver to drive one mile, hour by hour, on an average Tuesday.

“With the largest voter turnout expected in 50 years, voters driving to the polls on November 6th will be impacted by weather, road repairs, and certainly traffic,” said Yo Koga, CEO and Co-Founder of Drivemode. “While navigation apps can help drivers determine moment-to-moment conditions, seeing overall driving trends within a city can help voters plan their day.”

Below are the times Drivemode found to be fastest for drivers in Austin, Dallas, Texas, and San Antonio, based on the traffic of an average Tuesday and relative to polling station hours of 7am-7pm, statewide. For this study, we generally consider “morning rush” the hours of 7- 9am and “afternoon rush” the hours of 3pm or 4pm to 6pm, depending on the city as noted below.

AUSTIN
Fastest times to drive: 6-7am, 9-10am, 2-3pm/6-7pm
Get on the road 6-7am just before the polls open and your drive will be 17.3% faster than if you aim to get to the polls between 7am and 8am. If you can roll in late to work, 9am-10am traffic will be the fastest for the rest of the day. 6-7pm, the last hour of open polls, is approximately the same as traveling 2-3pm, and 15% faster than the slog between 3pm and 6pm; however, since that’s the last hour the polls are open, you may not want to wait that long.

HOUSTON
Fastest times to drive: 6-7am, 9-10am, 6-7pm
The fastest time of day to head to the polls will be first thing in the morning just before they open at 7am. But if you aren’t looking to get out that early, join the Dallas crowd and leave after morning rush: 9-10am will be 8% faster than morning rush (7-9am) and the fastest time for the rest of the day. Afternoon rush starts ramping up after 3pm with a 4-5% slowdown hour over hour until 6pm when your drive will be 8.9% faster than earlier.

SAN ANTONIO
Fastest times to drive: 6-7am, 3-4pm, 6-7pm
As with most of our cities, the best time of day to travel will be between 6am and 7am, where in San Antonio, your trip will be 24% faster than if you go 7-8am. After 9am we see traffic steadily increasing and hitting its worst between 5 and 6pm. If you must leave in the afternoon, 3pm will be your best bet, 9.7% faster than later afternoon rush (4-6pm). But 6-7pm is the fastest hour of driving during the second half of the day overall and 13% faster than the hour before.