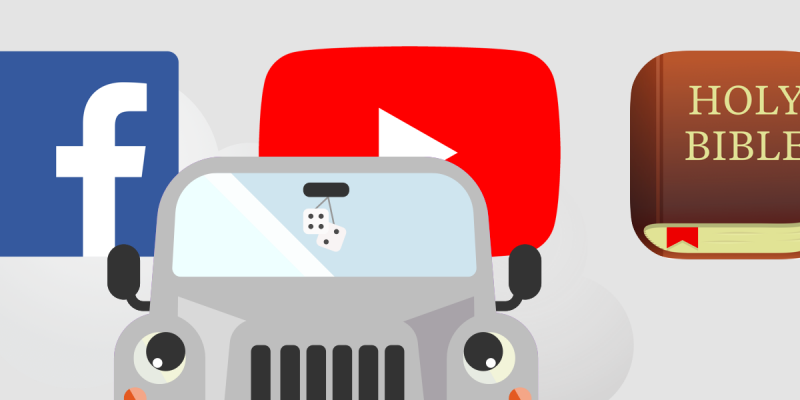 Even without analyzing millions of driving data points like we do at Drivemode, it should be no surprise that the most common, or primary, apps to use while driving are music, navigation, and messaging apps.
But with more apps available than ever before, drivers are becoming more adventurous in what they launch while behind the wheel. These “secondary apps,” as we call them, include video streaming, social media, podcast managers, and even a particular mobile game. Analyzing trends in these apps plays an important role in predicting what drivers would expect from a connected car experience. To learn more about this driving behavior in the US, Drivemode reviewed the data of over 757K anonymized Android users and 27K individual app launches of the 30 most popular secondary apps after messaging, navigation, and music.
Overall, we learned that in this era of being ever-connected, a predominant desire of drivers is access to video content. Anecdotally, we have heard that Drivemode users access YouTube videos for the music, not necessarily for the visual content and we suspect that unlimited video streaming services offered by some phone carriers are likely contributing to this trend.
Notable Results

“While our study covers a specific population of US Android drivers technologically savvy enough to use a safe driving app, it’s reasonable to see how these trends may extend to the US driving population at large,” said Yo Koga, founder and CEO of Drivemode. “Whether we like it or not, it is clear that video streaming is a top feature drivers want now. Given this drastic growth, video streaming apps would do well to take direct action and offer an “audio only” mode. As we know from Pokemon Go, asking users to tap a small button confirming they are actually a passenger is not a sufficient deterrent.”
As drivers are bringing technology into their cars, there is also a critical need for automakers offering semi-autonomous technology to address the issue of video streaming. While it is likely drivers are currently using video content for the audio, as more cars become semi-autonomous, drivers will be more tempted to watch what is on the screen because of the incorrect perception that their attention to the road is unnecessary. Koga said, “Anyone who cares about automotive safety should be monitoring these behavioral trends carefully.”
Below are the quarterly rankings for these most popular apps used by Drivemode drivers from January 2017 through June 2018.