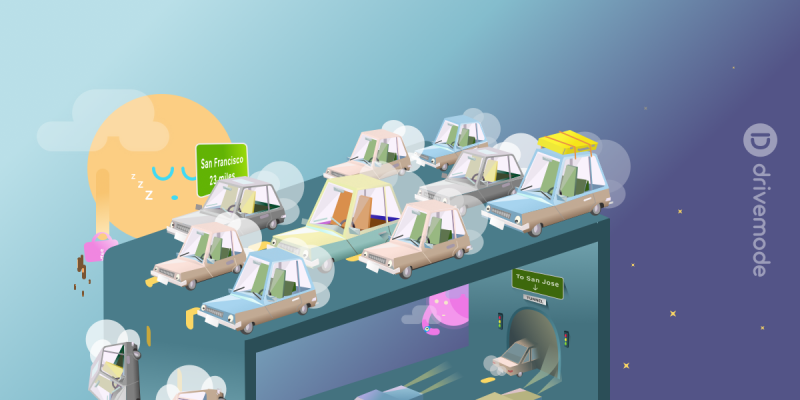 Drivemode Data Report: Where And When Commuting Takes The Longest

Committing to the drudgery of commuting day in and day out can be one of the most challenging parts of work. Whether it’s morning or evening rush, the roads are filled with stressed folks running late, sleepy people, and the grumps who are not looking forward to wherever they are heading. Drivemode took a closer look at rush hour driving trends to uncover when and where the burdens of commuting are heaviest.
Drivemode reviewed the data of over 455K anonymized Android users from January 2017 through May 2018, driving over 184.2 million miles and producing over 278.3 million points of anonymous GPS location data. With this information, Drivemode set a 25-mile radius around a central point of a metro area with 32.5 million location data points to find the averaged aggregated duration of driving sessions by hour and day of week within each metro area, using 6am to 10am as morning rush hours and 3pm to 7pm as evening rush hours. The purpose of this study was to analyze commuting trends at different hours within rush periods to see if there are notable differences between hours or between metro areas.
“The hours during which drivers’ commutes are longest may be due, in part, to the fact that people with different kinds of jobs may endure different commuting realities,” said Yo Koga, CEO and founder of Drivemode. “In many big cities, if you hit the road in the 6am hour, you’re spending the longest time behind the wheel of all morning commuters. Such drivers may be heading to shift jobs that start at 7am. Those workers may live farther from their jobs than, say, a professional in a corporate office, whose workday starts at 9am and who may have housing options that allow him or her to live in relatively close proximity to the workplace.”
“In some cities, longer commute times undoubtedly relate to traffic patterns there,” said Koga. “Knowing these trends can help commuters choose when to hit the road, particularly in summer months when some offices have more flexibility with work hours. Of course, navigation apps can give you the best idea of traffic conditions at the moment, but knowing more about overall trends can help commuters make the most of their time on the road.”
Summary Findings

“Drivemode users are likely more active drivers than average American motorists, so their commute times are longer than what we know to be typical,” said Koga. “The relative length of their rush-hour drive times, however, reveals trends that we believe extend to American roadways. The metros and the hours that see the longest commutes in our study reflect a reality for commuters generally.”
The table below shows the morning and evening rush hours for 20 major metro areas, sorted by longest average commuting time in minutes for Drivemode users. Each rush period was divided into morning and evening sessions of 6am-10am and 3pm-7pm to see hour-by-hour behavioral trends. The time for the longest and shortest commute lengths are listed below, along with the difference in time between them.

For additional insight into commuting times, Drivemode also compared metro areas using the number of minutes it takes an average driver to drive one mile during morning and evening rush hours. In 8am-9am rush traffic, driving a mile in Miami, New York City and Boston takes the longest out of any city with 2.91 mins, 2.77 mins, and 2.51 mins, respectively. During that same period, San Diego drivers enjoy the luxury of 41% less time to drive a mile than drivers in Miami, clocking in at 1.71 minutes per mile. St. Louis and Minneapolis follow San Diego with the fastest mile drive times at 1.75 and 1.81 minutes respectively.
One Morning Mile: How many minutes it takes to drive one mile, 8am-9am local time

In 5pm-6pm rush traffic, driving a mile in Miami, New York City and Los Angeles takes the longest out of any city with 3.09 mins, 3.08 mins, and 3.06 mins, respectively. During that same period, drivers in St. Louis and Minneapolis enjoy 54% less time to drive a mile than drivers in Miami, both coming in at 2 minutes per mile. Phoenix comes in third with the fastest mile drive time 2.14 minutes. Overall, the time it takes to drive a mile during 8-9am is less than 4-5pm. A morning mile takes 1.71-2.91 minutes, averaging 2.21 minutes across metros, whereas an evening mile ranges from 2.0-3.09 minutes, averaging 2.55 minutes across metros.
One Evening Mile: How many minutes it takes to drive one mile, 5pm-6pm local time

DATA CLEANSING
Data cleansing included conversion of raw data of meters per second to miles per hour and rounding to integers; removing outliers, invalid data, and erroneous GPS locations; capping dating at erratic or possibly unrealistic gps report of speed (eg: exceeding 125 mph). Quality checking included GPS distribution checks and metro area latitude/longitude average map plotting tests. Drive times were defined by their starting time, eg: if a driver departs at 6:45 and arrives at 8:15, their trip was incorporated into the 6-7am bracket.