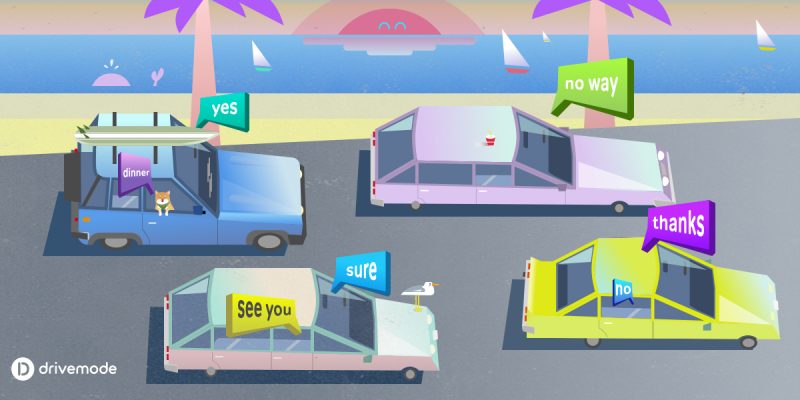 Drivers who need to stay connected require safe options for sending and receiving messages while on the road. With talk-to-text and a simplified interface, over a quarter of a million drivers took advantage of Drivemode’s safe messaging features in 2017. Through our integrations, drivers were able to send and receive messages through a variety of their favorite communications apps.
Drivemode looked at anonymized driver behavior of Android users to understand what our drivers preferred for messaging. “Staying connected on the road is crucial for many drivers and how they choose to send and receive messages helps teach us how they prioritize communications on the road,” said Yo Koga, co-founder and CEO of Drivemode. “Messaging, as an inherently two-way system of sending and receiving, also reveals larger communication trends throughout the nation.”
Drivemode analyzed more than 4.3 million user sessions when a messaging app was launched, among over 266K unique users. The data was collected from January 1, 2017 through December 31, 2017, across 50 states plus Washington, D.C. The rankings below show the percentage of user sessions that each messaging app was used by U.S. Android drivers in 2017. Not included in this analysis are image-based messaging applications such as Snapchat.
National Rankings of Messaging Apps

Nationally, SMS was the first most popular method of messaging in every state and earned 49.8% of all messaging sessions, with various messaging apps claiming the other half. State-by-State, SMS was least popular in New York and Florida, falling under 40%, while Rhode Island and Alaska most preferred SMS, coming in just above 68%.
Though the number of sessions were relatively close between WhatsApp and Facebook, WhatsApp earned the #2 spot in only 10 states plus Washington, D.C. while Facebook Messenger was preferred in the remaining 40 states. Textra pulled into the #3 spot in Hawaii and Utah, and ranked #4 in 32 states.
WhatsApp was preferred among the larger populations of the Northeast, ranking #1 in Massachusetts, New Jersey, New York, and Pennsylvania. Additionally, WhatsApp had a 10-13 point differential above Facebook in New York, New Jersey, and Florida, showing impactful penetration in those states. Conversely, in West Virginia, Kentucky, and South Dakota Facebook had a 30-35 point differential above Whatsapp. In fact, 12 out of 16 Southern States and the entire West preferred Facebook. California, however, was notably close with only a 0.21 point differential between Facebook and WhatsApp. See the top rankings in the table below with the percentage of time those apps are used among messaging sessions.